The three-story building was complete, and no modern skyscraper was ever viewed by its builders with greater pride. The Sun Rises

Soon after the pioneer group of Mu Yan shepherds, fighters, and artisans reached the Great Plains, they were attacked by a band of Cari Yan Forest Dwellers. Though the Mu Yans beat back the attack,  this made defending the Plains their first priority and led to the first building in Lemuria. This event, taken from the Akashic Record, is from Robert Stelle’s book, The Sun Rises.

The group planned a protective wall where the trail onto the Plains was fifty feet wide, with a cliff on one side and the Hatamukulian River canyon on the other. Hut, one of the leaders, asked if instead of a wall, they could build a house attackers couldn’t climb over and defenders could shoot at them from the roof.

This was a startling idea for people who lived in temporary huts made of branches and grass. But Dargh said his Cave Dwellers could do it. They would make it 50 feet long to block the trail, and 30 feet wide, with an opening cattle could be driven through from the valley, closed by a stone door.

When the wall was five feet high, Dargh hit trouble. He had built only straight walls, and now realized building walls must be joined with corners. Tearing out the ends of the wall was hard because Dargh braced each stone with the next so it was impossible to shift any once in place. After several days of careful work, the first corner was turned. And when the wall was complete, the outer surface offered no hand or foothold for an attacker to use, and was watertight.

How to make a roof perplexed the Plains Dwellers. The only buildings they knew were made of interwoven branches, but they wanted permanent homes of stone. They made models of stone houses covered by a lattice of twigs, but when they covered the top with stones, it collapsed. The Cave Dwellers had a solution. They would make the roof of flat stone.

Rhu shook his head. “If we had the entire Mu tribe here, we could not lift and carry a stone big enough to cover this hut.” But Dargh was equal to this task. “Build stone piles (columns) from floor to roof,” he said. “Hold flat rocks for roof. Cave Dwellers cut small so can carry flat rock to roof and rest on stone piles.” These smaller flat rocks were cunningly joined to fit tight and not leak.

Not only was the building a success, but soon, two more stories were added above the first, with a great stone door, balanced on a central pivot, closing the eight-foot entrance. The building protected and sheltered the new settlers while family homes were built nearby on the Plains. Soon, the first families began streaming through the door with their herds of cattle, and earth’s first civilization was on its way. 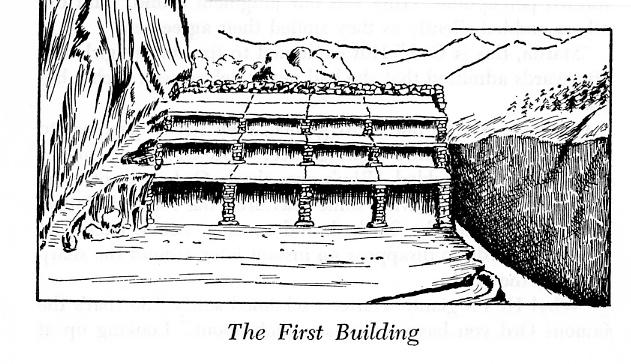 Wood was not used for building in Lemuria. Since most tribes used groves of trees for their religious ceremonies, trees were venerated. And in the beginning, they had no tools for cutting wood into practical sizes. When the tools were invented, building with stone was firmly established. Great care was used in building structures that were practical, usable and durable.

And next to craftsmanship and utility came beauty. In the full flower of Lemuria’s glory, public buildings and even residences were decorated with designs of precious and semi-precious stones. Jade, onyx, marble, jasper, obsidian, quartz, and even emeralds and rubies were used.

2 thoughts on “First Building in Lemuria”