Light in My Darkest Hour 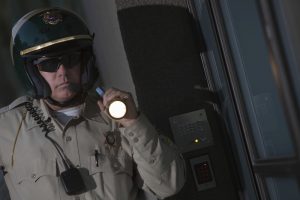 My darkest hour began with the staccato tapping of a police officer’s flashlight on my bedroom window at 4:00 a.m. , triggering a growing dread as I hurried through the dark house to the door. Why weren’t the dogs barking at the doorbell? The three of them were always there unless my husband had taken them for a drive. And where was my husband? Was he okay?

That was the question I asked the two officers at my door. Then a chaplain appeared behind them, holding a Bible. I knew the worst thing I could imagine had happened.

There had been an accident, the first officer said, and my husband had died at the scene. His and another car hit head on. They had to use the “jaws of life” to reach my husband, so the dogs were imprisoned in the car for some time after the accident. My Labrador had been badly injured and was at the animal shelter, but the other two dogs were so badly frightened that as soon as the door was open, they took off running.

I was stunned – in shock – yet strangely calm. I knew  in that instant that my life had just changed completely. All my family lived 1,700 miles away, and without my husband and dogs, I had never felt so totally alone as I did at that moment.

The one thing I did have was the Lemurian Philosophy. I had studied the Philosophy for several years, so intellectually I knew I would have help getting through this devastating time. But I had no idea how deep my faith had grown, how comforting it was to be in touch with the Lemurian Fellowship and have their guidance and the benefit of all I’d learned that would be with me through this time. I turned to God and my Lemurian lessons and began to put one foot in front of the other and move forward. In my heart I knew I would ultimately be okay.

I needed courage to face life without my husband, whose love and support had sustained me through our 26 years together. I’d always been independent and taken care of most of the household duties, but now I wasn’t sure I could live on my own – or if I’d have to move back to live with my family. I wasn’t sure where to start with funeral arrangements, and so many other decisions I had to make filled my mind. It was overwhelming. So I took time to read the Philosophy, started a list and began to check off each task as I completed it.

The Philosophy taught me that everything happens for a reason we often can’t fully understand at the time of crisis, but that I am never alone even in my darkest hour. The help of God and my Fellowship teachers sustained me through the months ahead as I faced the many ups and downs. Life brings some hard things, but having a deep feeling that all was well sustained me with a strength that to this day is hard even to put into words. I am so grateful to be a Lemurian.

(Note: This story is an example of the kind of faith and willingness to use the Lemurian Philosophy in our lives that is a requirement for earning a place in the Lemurian Order. The author is now a staff member at Gateway.)

We must let go of the life we have planned, so as  to have the life that is waiting for us. – E. M. Forster

3 thoughts on “Light in My Darkest Hour”