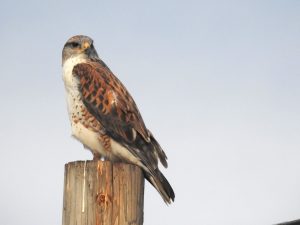 I have yet to develop many aspects of true observation and I hope this mundane example will help explain what I mean. I’ve always loved working on cars, and learned enough to find a job in an auto shop. I think I’m reasonably observant in this area, but a mechanic friend, James, has developed listening into a fine art and a great example of the power of observation.

A customer brought in a car that he said was making a “screeching noise” from the front every once in awhile, and left it for repair. James looked at it right away, figuring it might show the symptom more readily while it was warm. I started offering suggestions – a slipping belt, bad bearings, air conditioning clutch. As I talked he raised the hood and checked belt tightness, eliminating that. Then he started the engine and revved it up. I listened, but could tell nothing over the noise.

James got a stethoscope and listened at several points as he revved the engine. To my amazement, he turned off the engine and said it was a bad bearing in the air conditioning compressor. I asked him how he reached this conclusion so quickly and why he was so sure. He had me put my hands on the front fender where he had leaned over the engine and revved the motor again. After several tries I noticed a subtle vibration through the fender when the engine revs were falling, not rising. He gave me the stethoscope and had me listen again. I heard the air conditioner compressor make a different noise just as the vibration came on.

James had saved the customer the cost of a compressor and clutch, as only the front bearing needed to be replaced. I thought a lot about this demonstration of the power of observation.

James was always a step ahead of me at work. I put it down to his experience, but I was missing his power of observation!

I tend to use the shotgun approach to car repair, eliminating a range of problems one by one. This works, but takes lots more time. James was like a marksman with a laser-sighted rifle on the problem, his eyes, ears, and mind all engaged at once. Experience helped him, but he always quizzed his customers about their car problems thoroughly before he offered any solution, and sometimes not even then, while I jumped to conclusions that may or may not turn out to be related. It made me think about what more I might see if I listen.

[The Lemurian who wrote this story rightly attributes several important character traits to his mechanic friend. And he modestly downplays his own skills in comparison. We happen to know he is a very good mechanic in his own right, as well as a sought-after repairman, but the quality that really stands out in this story is his appreciation for another’s power of observation and willingness to learn from it.]

3 thoughts on “Power of Observation”